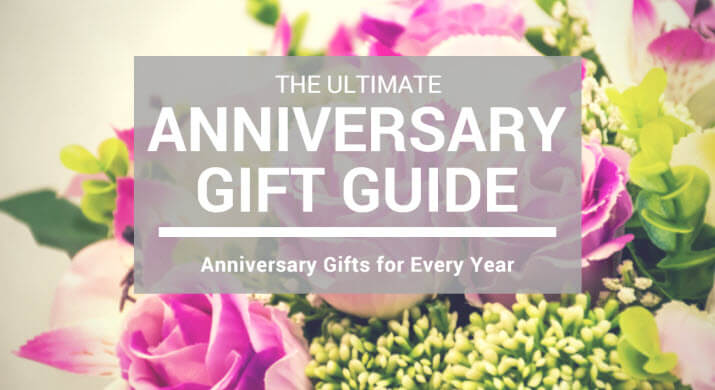 The tradition of celebrating wedding anniversaries dates all the way back to the Middle Ages [ Read: The History of Anniversary Gifts ]. Today, it’s common for couples to commemorate their special day with gifts, dinner, a night out, and even a romantic getaway or a second honeymoon.

For generations traditional, symbolic gift suggestions have guided us in finding meaningful, significant and appropriate ways to celebrate. The popular traditional and modern anniversary gift lists help us find special meaning in each anniversary year, making the occasion even more exceptional and memorable.

Find Anniversary Gifts For Every Year

However, finding the right gift for your spouse (or another couple) can sometimes be a challenge, especially if you’re trying to follow the traditional gift suggestions. Lace (the traditional gift for the 13th anniversary year) might have been a popular gift at some point, but today it’s not as common. Same goes for ivory (the theme for 14th year anniversary gifts), which is no longer an ethical gift option and can be a bit tricky.

Luckily, each anniversary year offers several different options, including modern gifts, jewelry and gemstones, flowers and even colors that can help you tie in your present to the corresponding year.

Anniversary Gift Ideas For Every Year

To help you quickly find what the different symbolic gifts and themes are for each anniversary year — and to offer some unique gift suggestions — we’ve put together a comprehensive anniversary gift guide that includes a section for each year: 1 through 60.

In this guide you’ll get a list of the traditional and modern gifts, the designated colors, flowers and jewelry that represent each anniversary year. You’ll also find unique gift ideas for him, for her and for another couple, including some great ways to celebrate big milestone anniversaries.

The traditional anniversary gifts and their symbolic meanings are listed for years 1 through 15. After that only milestone anniversaries occurring every 5 years have traditional symbols and meanings. However, the years in between are recognized with an anniversary theme and a modern gift, so you still have plenty of gift options and great ways to celebrate.

As you’ll notice, the traditional gifts tend to increase in value and substance along with the years, from common paper and cotton all the way to emeralds and diamonds. The modern gift suggestions tend to be more practical (clocks, appliances, silverware, etc) and some might be a bit outdated (like desk sets, bone china or silver holloware) but you can always take the general idea and just run with it.

The important thing is to find something that’s personal, intimate and tailored specifically to the individual or couple. With this in mind, please use our gift suggestions as a starting point to create the perfect personalized anniversary gifts to make each wedding anniversary a day to remember.

Find Anniversary Gifts For Every Year